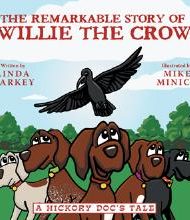 This picture book for early readers tells the story of a bird and dog that become friends.

Narrated by a brown dog named Chicoree’s Hickory Doc (a German Shorthaired Pointer), the story begins one day at Lazy Dog Hacienda when a young black crow with vision problems falls from the sky and lands on Doc’s daughter, Patch. Although Patch will grow up to become a hunting dog, she and Willie the crow become friends, much to the dismay of the other dogs at the Hacienda.

Doc’s cranky brother, Zeke, is most disturbed by this relationship. Willie proves the value of their friendship, however, when Patch falls into the swimming pool and cannot swim to safety. None of the other dogs knows how to swim either, so Willie flies to the family’s large black Labrador Retriever for help. After Patch is rescued, the dogs agree that Willie is a valuable part of the team.

Offering a fresh approach, the story’s humor goes against stereotypes. Instead of a bird’s normal visual acuity, Willie seems to suffer from nearsightedness. And although people often assume dogs can swim or at least instinctively dog paddle, Patch and her relatives cannot. Full-page illustrations by Mike Minick are simple, yet effective, (although Willie’s size in proportion to the dogs is inconsistent from page to page).

Flaws include minor writing issues, such as missing and misplaced punctuation and some repetitiveness. (“Willie, go get Newt. Labs are great swimmers,” followed a few sentences later with “Labs are known to be great swimmers. HURRY!”) Several pages are text heavy, and early readers may prefer having the story read to them until their skills are more advanced.

Parents and teachers might wish the editing were a little sharper to elevate the book’s overall quality. Children, however, may be so enamored with the characters that they won’t notice the missteps.