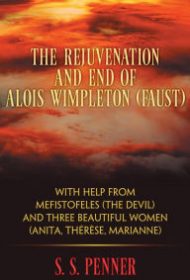 As the title suggests, The Rejuvenation and End of Alois Wimpleton is a modern version of the Faust legend, which can be found in various forms in the works of Christopher Marlowe, Goethe, Thomas Mann and myriad others. What makes S. S. Penner’s retelling unique is the fact that Alois Wimpleton, an award-winning scientist who barters with the devil, has no soul. It turns out there are only so many souls to go around, and Alois is one of billions who is soulless. So what could Mefistofeles (sic)—called Viaggare in this book—want with him?

In this bargain, Wimpleton agrees to have his consciousness switched with other people or animals for the Viaggare’s entertainment. In return, over the course of three years, he will become 30 years younger. But the demon isn’t really after entertainment; what he really wants is for the brilliant Wimpleton to join villains and scientists of the past and head up Hell Research Center. His task? To discover the building blocks from which Hell was created, so the devil can expand his realm.

On the way to this diabolical duty, Wimpleton falls in love with three beautiful women in three European cities. None of these love affairs quite works out, but Penner’s excellent and tactile descriptions of Milan, Paris and Vienna during these romantic trysts are standouts. Readers will find themselves transported to some of the most beautiful and historic cities in the world.

The author also skillfully satirizes modern religion, politics, education, ethics and science itself as the story unwinds. Penner gives readers pause for thought as Wimpleton finds many similarities between heaven and hell, discovering that political posturing doesn’t end after death, for example, and that neither science nor religion provides all the answers—nor even the correct questions.

Using the Faust legend as metaphor, the author brings new life to an old story, delivering a narrative sure to captivate readers, even those unfamiliar with the original tale.