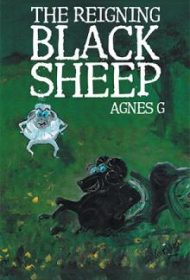 A year after Agnes G’s son Lee was born, doctors informed her and her husband that he had cerebral palsy. Thus began a 40-year journey the Australian mother recounts in The Reigning Black Sheep. This, she advises, “is not a peaches-and-cream story of how well we did; it speaks to how we often didn’t do well.”

Agnes, her husband and Lee were pioneers. Society in the 1980s and ’90s was just leaving the dark ages, when the disabled were neither seen nor heard and definitely not accepted by the public. But Agnes—a self-described “cranky, opinionated pest”—became an advocate not only for her son but for others in similar situations. Her mission became to question doctors, politicians and others in authority, and her persistence opened doors—literally—for those with handicaps.

Stories of such challenges are the elements of an excellent book. Unfortunately, flaws in this volume make it a difficult read. Run-on and awkward sentences are hard to navigate, as in: “Always with a future in mind forms were diligently filled out in the hope fruition would come to our lives.” Also, hundreds of rhetorical questions intrude.

The biggest problem, though, is repetition of topics, mostly big-picture issues: how treatment of the disabled has changed over 40 years; needs of today’s disabled; sacrifices her other children made without complaint; her desire for the best possible outcome for Lee. The impact would have been greater if these talking points had been distilled into separate, concise chapters instead of drifting through the narrative.

There’s also a feeling that chapters were tacked on instead of integrated into earlier passages. Better organization and a tighter rein could have cut 200 pages from the book.

Despite the shortcomings, readers, especially parents and caregivers, can find lessons here surrounding: finding the right caregiver; creating family unity and commitment; seeking alternative ways to sharpen coping skills; double-checking everything a surgeon does; and making sure patients and roommates are compatible.