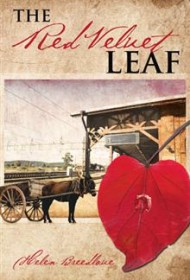 Helen Breedlove’s The Red Velvet Leaf is a coming-of-age story comprised of equal parts romance and historical fiction. Set during the Depression in the rural Midwest, the narrative follows 17-year-old Rhoda Sue, whose father inexplicably kicks her out of the house by placing a newspaper advertisement to find her a husband. Rhoda is cast out from her family home to start a new life in a new place with Zack Kelmsley, a man she’s never met.

Breedlove has created interesting, complex characters. Though young, Rhoda has insights that, while unusually mature, can easily be attributed to her being the eldest of six children in a family where poverty and her father’s cruelty is overshadowed by her mother’s abundant love. Zack is a young widower whose only happiness comes from the young daughter he had with his first wife. He is haunted by his love for his deceased wife, which influences not just what he says to Rhoda, but how he communicates, usually in an abrupt and harsh manner. Rhoda and Zack are reluctant to divulge too much to each other, although Rhoda has a large catalog of pearls of wisdom from her mother that she readily dispenses.

The Depression is nearly as prominent as the characters. References to FDR’s Fireside Chats, the WPA and scarcity, whether through descriptions of clothing or possessions, are plentiful.

The mystery behind Rhoda’s banishment is not revealed until late. Consequently, it’s a distraction. The explanation is also disappointing because of its predictability. Although there are few surprises, the overall result is a satisfying story that moves at a comfortable pace as the characters navigate their feelings and endure the era in which they live.