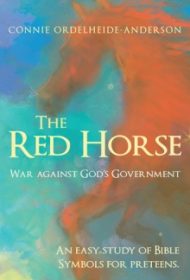 With its cryptic prose and often grotesque imagery of angels and devils in battle, the Christian book of Revelation has perplexed readers and scholars for almost 2000 years. In The Red Horse, retired dental hygienist Connie Ordelheide-Anderson looks to unpack what she sees as the prophetic signs and symbols that permeate the text.

Drawing on what seem to be her own visionary insights as well as those of Seventh Day Adventist founder Ellen White, Ordelheide-Anderson scrutinizes Revelation passage-by-passage looking to show that the ebb and flow of spiritual conflict depicted in this ancient text has parallels with more current times. For instance, the Holy Spirit, she argues, inspired people to tear down the Berlin Wall and to defy tyranny by participating in protests in Tiananmen Square. Yet, the devil is still seen in the terrorist attacks of September 11th. Through these expositions, the author introduces us to the semiotic nature of Revelation: stars in the Biblical text symbolize good angels; water symbolizes the people of God and so on.

Along the way, the author shares a number of stories, including a tale of a young teenager oppressed by demons. Names, like symbols, have power, the author argues, and the teen eventually evokes the sacred name of Jesus to combat evil.

While there are interesting observations in The Red Horse, it suffers from writing issues that muddy the author’s ideas. From the earliest pages, there are numerous awkward sentences, and ideas are often introduced without being fully fleshed out. For example: “Prophets spoke then repeated themselves expanding their thoughts. This created added value to a symbol and created what I call a prophetic function. For instance the text below we have the words, days, voice, angel, seventh, mystery, God, servants, sound, begin, declared, finished and prophets.” Many similar puzzling passages can be found throughout the book.

Overall, The Red Horse has potential, but it needs thorough editing to help clarify the author’s ideas.