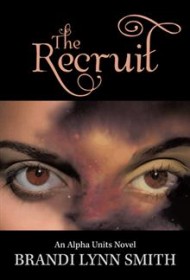 Superpowers, secretive agents, spaceships and ancient prophecies all come to surround a mysterious young woman in this paranormal adventure from Brandi Lynn Smith.

Kateen “Kate” Richmond survived a New York gang war between Kate’s side and the bad guys, dubbed “Blade,” who murdered Kate’s best friend seven years earlier. One night, Kate has a violent run-in with the leader of Blade’s Big Apple outfit. The officer on scene takes notice of Kate’s preternatural speed and ability, not to mention the fact that her eyes change color with her mood — and before you know it, Kate has been tested and found to hold a set of superhuman abilities known as “The Power.”

She’s quickly recruited into a reclusive agency called the Alpha Units. “Our job is to look into situations involving people like us who have the Power, or other strange situations,” Kate is told. It doesn’t hurt that the Alpha Units have toys that make James Bond’s Q Branch look like a hardware store. From hover cars to teleportation, these men in black have whatever gizmo Kate needs to fulfill her destiny.

The fact that she never really succeeds is forgivable, since The Recruit was obviously written as the first in a series. There are, however, many plot points left unresolved or unexplained. Kate spends much of the novel’s back half on the organization’s orbiting military base; there are also lightweight intrigues about a mysterious alien artifact, a war with an opposing force called Ebony 9, and a prophecy dubbed “The Return.”

Collectively, though, Smith does a fine job synthesizing many of the popular elements from similar books, such as Pittacus Lore’s the Lorien Legacies series or Cassandra Clare’s The Mortal Instruments. With a plucky heroine, far-out action sequences and likeable characters, readers could do much worse than to sample this replica of popular teen fare. Think Katniss Everdeen (The Hunger Games) thrust into Ender’s Game and you should just about get it.