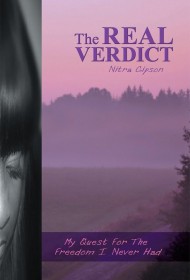 Nitra Gipson’s book, The Real Verdict, focuses on three formative influences in the author’s life: the sexual abuse she received from her step-grandfather, the trial and execution of her uncle, and her lawsuit against a department store. Each chapter is prefaced with an introduction wherein the author tries to make sense of her experiences and to give advice to those similarly situated.

Gipson’s primary message in regard to child abuse is that a subsequent cover-up greatly augments the damage done to a child. Gipson’s grandmother refused to acknowledge her husband’s transgressions and failed to protect her grandchildren. As a consequence, Gipson is still struggling with the psychological scarring created by incidents being “swept under the rug.”

With the story of her uncle’s trial and execution, Gipson criticizes the failings of the justice system. Gipson believes her uncle was innocent of murder, and that he would have been acquitted if he’d had an adequate defense.

The stresses in Gipson’s background surface when she, herself, is accused of forgery and is falsely detained. Horrified by being jailed, Gipson temporarily falls apart. Through the years however, she has been learning to stand up for herself. She engages a lawyer and puts up a valiant fight for her good name, ultimately winning a judgment in her favor.

Although Gipson’s memoir gives the reader a sense of the trauma in her life, the work as a whole lacks the insight that would make for reflective reading. Rather than depicting her mother as a fully rounded human being, for instance, Gipson devotes much of her book to excusing her for not picking up on the child abuse inflicted by Gipson’s step-grandfather.

Good memoirs often require years and distance between the writer and his subject matter for the writer to acquire the perspective to render his account with maturity. This memoir, while perhaps of interest to those who struggle for validation, simply lacks the distance to resonate with readers.