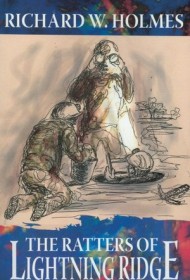 As Humphrey Bogart and Walter Huston might have attested, the age-old quest for gold or precious gems brings out the worst in people, but also sometimes a hint of human glory. Retired California accountant and lapidary hobbyist Richard W. Holmes understands that, too, and in The Ratters of Lightning Ridge has found his own version of the Sierra Madre – complete with scoundrels, cutthroats and the occasional kookaburra – in the Outback of New South Wales, Australia. On this treacherous frontier, rough-hewn prospectors of many stripes and moral views seek their fortunes hunting black opals.

Holmes’ book is heavy on tech talk – at times, it reads like an opal-mining textbook – and the narrative can be shapeless and repetitious. But his heroes, an upright prospector named Rusty and a no-nonsense, leather-faced cattle rancher/miner called Kate (no surnames supplied) add a dramatic spark. Along with a Yank investor, Rusty and Kate inevitably find themselves at war with “ratters,” low thieves who jump the claims of legitimate miners. Sometimes the villains overdose on heroin and booze, but they’re just as likely to sell their stolen booty to a Chinese opal merchant for millions.

Holmes, who once was involved with Aussie opal-mining schemes himself, absorbed plenty of local color on his trips Down Under. He knows a girl is a “sheila,” a 10-ounce glass of beer is a “middie” and the “mulga” is a highly poisonous snake. Holmes also picked up some vivid bar talk. Questioning his mate’s sanity, a bloke in a pub asks: “Gotta kangaroo loose in your top paddock?”

The Ratters of Lightning Ridge might be more compelling if cut by a third, but Holmes’ enthusiasm for the rough-and-ready life and the temptations of sudden wealth (“You can’t trust me, and I can’t trust you,” Kate barks at Rusty) makes for a rousing tale. Hand-drawn illustrations and a glossary of Aussie-speak fill out the package.