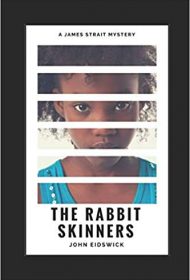 Racism, violence and an unforgiveable trespass against a child underlie this brittle, brutal crime story that lies somewhere between the unrelenting vengeance of Lee Childs’ Jack Reacher novels and the “country noir” of Daniel Woodrell.

John Eidswick opens his novel with the bang that shatters his hero’s life. FBI agent James Strait and his team, including girlfriend Amelia Garcia, are in a risky standoff with a cult that possesses a cache of deadly VX gas. When the raid goes awry, Amelia is killed and Strait makes a heartbreaking decision that wounds him emotionally nearly as much as his injuries.

Lauded in the press but wounded and suffering from vertigo caused by Meniere’s disease, the warrior limps home to Pine River, Arizona to recuperate. There, he gets involved with a nurse and her family; a pretty local pastor, and a housewife in an abusive marriage, among other parochial dramas. The core mystery, though, is the disappearance of a nine-year-old girl named Jophia Williams.

The local cops are a racist, abusive group led by corrupt police chief August Kladspell. Struggling with his grief, Strait is reluctant to get involved but true to the hero’s arc, can’t help himself. Eidswick feeds him numerous sketchy suspects, including the girl’s father, a white supremacist group called the New Confederation, and a convicted pedophile with a few screws loose.

The book’s second act can feel sluggish as Strait works through the mechanics of a procedural investigation, seeks medical help for his vertigo, and flirts with the aforementioned pastor. But Eidswick sticks the third act with a jaw-dropping twist that makes all that came before seem benign by comparison.

This is a solid, engaging and disturbing story with rich prose and curt dialogue, a noble protagonist whose flaws make him fallible, and a believable portrayal of the undercurrent of racism and violence that can infect a small town. Readers will find it well worth the price of admission.