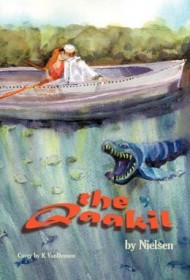 Upstate New York newspaper columnist and technical writer Bill Nielsen’s thriller, The Qaakil, is something rare: a page-turner with a conscience. High on cliffhangers, the novel also contains other elements of a gripping summer read: predatory fish, people in jeopardy at the waterside, a race against the clock and budding romance between likable and attractive characters. And there are bonuses: a mysterious legend reflecting a scary reality and a timely environmental message, too.

The novel begins with scenes setting up the tension that will carry through the rest of the book. First, an Inuit husband and wife meet their deaths in a cold Canadian backwater where they were forbidden to hunt; some years later, wealthy American John Stanton and his Inuit guide are grimly killed in the same place. Inuit legend has it that this remote world of lakes and islands is home to a predatory fish god who wreaks death on any who enter the area.

As the story continues, it becomes clear that the legend is uncannily close to the biological truth, as the 16-foot-long (or longer) denizens of those backwoods waters devour entire caribou in a matter of moments. The tension ratchets up as Stanton’s brother and then Stanton’s son, Colt – along with a gorgeous biologist named Molly – race to prove the existence of the fish before some specimens that John Stanton had illegally imported to New York State kill people there.

There are a few quibbles: a brief backstory about Molly is distracting and unnecessary for a character who can hold her own without it. Then there’s the problem of the title: the word “Qaakil” suggests science fiction or fantasy and does not do enough to grab readers’ attentions. That’s too bad, because this powerful, outdoorsy, real-world thriller deserves a wide audience.