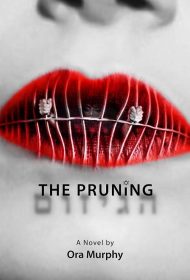 Ora Murphy’s heartwarming contemporary romance novel, The Pruning, follows Ruth Anasco in her struggle to find her roots and establish an identity for herself and her children.

Brought up by distant adoptive parents, Ruth remains unclear about her heritage until she meets the daughter of a prominent Jewish family at a boarding school in Spain. The family invites her into their home, treating her as their own and inspiring her to practice Judaism. More than 20 years later, still passionate about Judaism, she applies to begin the official conversion process. Awaiting the results of her application with apprehension, Ruth meets Samuel, a man whose whole identity is tied to his Jewish roots. As their love story evolves, cracks begin to appear when the question of identity arises.

In flashbacks, readers also learn of Ruth’s first marriage to Hector, an egotistical painter who is physically and emotionally abusive. When she leaves him ten years later, the story recounts her endeavor to provide a stable home for her three children.

An inspiring and loveable main character, Ruth shows personal growth throughout the story as she learns to value who she is and makes strides in her career and personal life. Minor characters are equally well-developed, propelling or challenging Ruth’s search for her identity.

The author builds suspense with surprising turns. In the beginning, Samuel seems the perfect match for Ruth, but his hesitance in accepting her as she is and his broken promises raise doubts. Meanwhile, ex-husband Hector pleads his way back into Ruth’s life, but his past behavior makes her wary. The story’s ending is thoroughly satisfying as Ruth finally finds answers for long-held questions and discovers who she truly is.

The Pruning raises essential questions about identity and the importance of a sense of self-worth regardless of one’s roots. It’s an irresistible read for anyone attracted to the theme of identity interlaced with a soul-stirring romance.