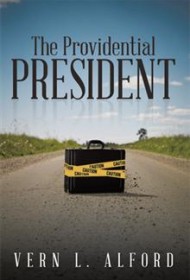 In his debut novel, Pastor Vern L. Alford portrays a renegade president of the United States who takes radical actions against America’s enemies in the name of Christian values.

After the elected president is felled by a heart attack 36 hours after taking office, conservative Vice President Christian William Hudnall is sworn in as president. A few months later, over 6,000 Americans are killed when the Morgan Valley Baptist Church in California is blown up by Islamic extremists from the Philippines, who entered the country by posing as illegal immigrants from Mexico.

Although Hudnall knows the truth about the terrorists, he keeps their origin secret, supposedly so the U.S. can track whoever was responsible for sending the Filipinos. But it mostly seems like an opportunity for the author to express some untoward ideas toward Mexicans, as Hudnall sends military troops to close the Mexican border, passes strict citizenship laws for new immigrants, and approves of the new “Law-abiding Business Movement” that encourages Americans to stop frequenting businesses that employ illegal immigrants.

Hudnall also has a secret cabal of advisors led by his best friend Mark Mason. Together, they hatch a plan to secure world peace—a plan that will strike many as wildly unlikely.

Even if readers buy into the book’s zealous worldview, the story has many issues. The world’s leaders are rather wooden in their narrative posture and dialogue, the plot is byzantine in its complexity, and the novel forces readers to make some gargantuan leaps of faith to embrace its unwieldy and implausible plot points. Ultimately, the all-American attitudes proposed by Hudnall and his men smack of jingoism, while its portrayal of other cultures borders on xenophobia.

The patriotic outlook and fundamentalist religious mores may appeal to some readers, but those with a less narrow mindset should look elsewhere for their thrills.