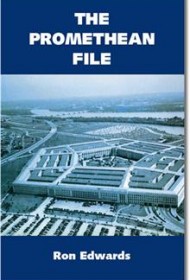 With a background that includes a stint in the military working in the super-secret bowels of Colorado’s Cheyenne Mountain for the North American Aerospace Defense Command (NORAD), a career as a pilot and time spent as a journalist, Ron Edwards would appear to have the chops to pull off a thriller about nefarious goings-on involving the U.S. Air Force, defense contractors and the fourth estate.

The news business sets the stage for this tale of a dogged investigative reporter named Alex Scott who is looking for the next big scoop. Alex thinks he has found it when a friend at the coroner’s office tells him about a rash of bizarre suicides that the coroner is convinced were, in fact, murders. After all, why would someone intent on killing himself attach wires to his dental fillings and plug the wire into a wall socket? To top it off, all the dead were employed by a top-secret defense contractor with ties to the CIA.

Little does Scott know that he has a story of a lifetime Â¬— one that may end his life, as well. When his articles about the bizarre deaths appear, his brake lines are drained; strangers try to run him off the road; his Mustang is riddled with bullets while he is in it. (Needless to say, Scott’s girlfriend is not pleased.) As his investigation continues, the reporter realizes that the story reaches to the top of the federal government.

While The Promethean File relies heavily on stereotypical thriller conceits (the crusading reporter, evil defense contractor and a steady round of attempts on the hero’s life), the story moves along at a good clip and the characters are well fleshed out. The only complaint would be that the action scenes feel truncated; longer careening car-wreck- and bullet-riddled-Mustang scenes would have increased the thrills. But the novel is as compelling as many of its predecessors and as worthy of poolside reading.