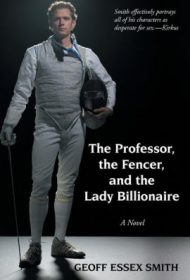 The recipe for The Professor, The Fencer, and the Lady Billionaire is simple: Take a billionaire beauty products queen named Bridge Austin, stick her in a New York penthouse, and give her the insufferable I-get-what-I-want demeanor of the late Leona Helmsley. Then have the lonely Bridge convince a Manhattan gay couple to move in with her for four months with no strings attached. (Of course, that really means an orchestra worth of strings.)

Reed and Erick aren’t paupers. Reed is a university professor and manages a hedge fund. Erick is 10 years younger, a former Olympic fencer with the body to prove it. They’re comfortably upper middle-class, but when Bridge makes an offer they can’t refuse, they become her temporary playthings.

It’s clear from the start that she wants to get between Erick’s Cuban loins, but the boys have their own bedroom agenda, including a hunky ex-Marine and a Greek restaurateur. And did we mention that each man also has a chick on the side? It’s not love in the air here but lust.

Sometimes that lust idles, allowing Smith to introduce dollops of Harold Robbins (a glib depiction of Wall Street as avarice personified), Jacqueline Susann (sex equals power politics) and Judith Krantz (jewels and haute couture make the person) as he chronicles high-end hormones. What’s missing is a plot thicker than a bed sheet. Bridge manipulates and every one fornicates. A swig of champagne, a quick nap or social outing, and the cycle repeats.

This isn’t a novel for those who crave a substantive page-turner. It’s for voyeurs who want a book that sweats in their hands, best read with a bottle of wine and a cold shower running nearby. On that score, it delivers.