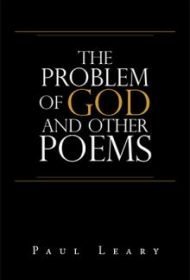 Paul Leary’s collection, The Problem of God and Other Poems, touches on myriad topics, including family, friendship, nature, and patriotism.

The book is divided into two sections. Part I includes narrative and lyric meditations on the above topics and more; Part II recounts major battles of the American Civil War in narrative verse. The poet relies on traditional rhyme schemes (including aabb and abab) throughout. For example, his poem “America Is” begins: “Not the flag, the music or the grand parade/ Are the stuff of which our country is made,/ Nor laws, nor books, nor churches with steeples,/ America is ours, we who are her people.

As in the above poem, Leary’s pieces tend to rely more on simple telling statements rather than distinctive details and original images. Most also incorporate antiquated diction (“to find the cleft twixt the sky and the rolling sea”), which distracts from the imagery at hand.

The poems show the most promise when they employ present-day diction and sensory images (“Some folks in Maine that I know/ Are still locked in the grip of winter./ Their eaves are hung with icicle splinters;/ Their woods and fields are choked with snow”). The author has an impressive familiarity with nature and a winking sense of humor, as with “On Finding One of My Poems Half Eaten,” about the speaker finding a dead mouse lying beside one of his “half eaten” poems and concluding: “That the mouse had died not from hunger,/ […] but rather from indigestion.”

The second part reads like a separate project and often seems more like reportage than creative writing: “A series of trenches opposite the Confederate lines were dug/ with stakes and abates protruding toward the enemy forts…”

Leary’s collection seems like two books in one. While it doesn’t deliver the startlingly fresh insights and imagery of the most accomplished contemporary poetry, those who like inspirational and amusing verse and historical-military genres will find rewards here.