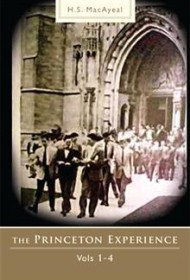 It takes place 60 years ago, but this richly-stocked story, which appears to be a thinly-veiled memoir about the author’s college experience, betrays no hint of the haziness of detail often wrought by time.

Through his protagonist Harry Douglas, the author reconstitutes, in minute particulars, late-night theological arguments conducted by 20-year-olds during the Truman Administration. We learn about “Poo” and “Skokie” and “Gouch,” Harry’s energetic pals on Princeton’s leafy New Jersey campus; Harry’s consuming first love for a beauty named Evie; most of the things he ate and drank at college parties; the girl he fooled around with in the back seat of a Ford and the guilt that ensued. Author H.S. MacAyeal replays Harry’s love for jazz, his youthful scorn for Ernest Hemingway (“a bad writer”) and his worries over the Korean War.

MacAyeal has also inserted some large, semi-digestible chunks of Harry’s senior thesis on Ralph Waldo Emerson, which gets mixed reviews from his faculty advisors. (MacAyeal’s a more nimble writer than his alter-ego. Example: “He was looking fixedly at a lithograph of an English hunt, a ride to the baying hounds over the fireplace, and was trying to find the little fox when the chairman swept into the room, graying and slightly stooped, with his hand out.”)

The author remains in thrall to the burning questions earnest undergraduates ask about God, Love, Art and Being, and to the golden Princeton of that time–the debates over Goethe and Spinoza, the undefeated 1951 football team, the 20-cent beers in a seedy townies bar and the splendors of the Princeton Inn, “an oasis within an oasis, next to an oasis of brains.”

All told, this plump, nostalgic volume offers a story that will be appreciated not only by former Ivy Leaguers of a certain age, but also by seasoned readers of American memoir in all its guises and weathers.