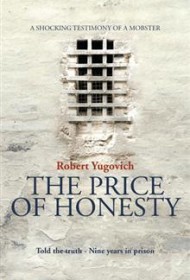 Robert Yugovich is the pseudonym of an international criminal with a specialty in drug smuggling across national borders on multiple continents. The author says he composed the book while incarcerated in a Hungarian prison. If he revealed his true name, he writes, fellow career criminals might target him for death; Yugovich notes that he also worries about the safety of his family.

The pseudonym seems superfluous, though, because the memoir discusses a lifetime of crime with great specificity. Even if all the other characters–they number in the hundreds–are tagged with phony names, it seems any insider reading The Price of Honesty would deduce Yugovich’s true identity.

Yugovich owns a rip-roaring personal saga, but it jumps around from nation to nation, organized crime outfit to organized crime outfit, without the benefit of strict chronology or any other organizing principle. When not alternately bragging about or condemning the criminal activities committed by himself and others, Yugovich offers touching passages about his wife, whom he met as a teenager, and his children. The question looms, however: if he loves them so deeply, why did he choose to place the greed of working within organized crime above the wellbeing of family members?

Another question looms about the book’s authorship. Raised in Yugoslavia before it broke apart as a nation, Yugovich grew up speaking both the Hungarian and Serbo-Croatian languages. He doesn’t profess to having received extensive education, but the book appears in English – idiomatic English at that. Where did he learn the language so well? If the book is translated, who provided the translation? Was the book, perhaps, penned by a ghostwriter?

Such curiosities aside, this book had great potential. With further editing, it could have been a unique primer on international crime told from a perspective rarely available to law-abiding readers. As published, filled with disjointed anecdotes, a confused brand of morality, and uncertain provenance, it must be judged a lost opportunity.