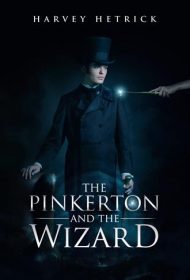 Harvey Hetrick’s genre-crossing tale, The Pinkerton and the Wizard, is a fanciful story that sees history’s most famous wizard, Merlin, traveling to 19th-century Philadelphia to engage in old-fashioned gumshoe detective work.

Hetrick casts Merlin in a role the wizard has long filled in the popular imagination: a benevolent, wise and helpful magician and scholar. Here, Merlin brings these skills to bear for Adam Blake, the titular Pinkerton detective who’s struggling to find purpose, contentment and the keys to some very personal mysteries.

Merlin runs into Blake after he transports himself and his wife Gwen from the fatal clutches of a sorceress in medieval England to the bustling streets of late 1800s’ Philadelphia. Merlin and his wife book a room in the same boarding house as Blake, and soon the wizard and detective find themselves paired on a series of challenging cases.

The cases draw elements from classic detective fiction: for example, the unlikely duo tracks robbers working to boost ancient treasures from museums. The pair also work to solve the mystery of Blake’s father, who was murdered in cold blood. As Merlin and Blake toil more closely to unravel these cases, Merlin aims to pass as a normal, 19th century man, but comes under suspicion by Edward Frost, a detective with Lloyd’s of London insurance firm who joins Blake in his work.

Hetrick’s tale moves dynamically across less than 200 pages. With his slim, spare style, the author summons the spirit of the most engaging of detective serials. Although he incorporates elements of magic and fantasy, the story feels more like a paean to Agatha Christie’s short stories or Arthur Conan Doyle’s shorter Sherlock Holmes outings.

The result is a fun story that combines a beloved character from Arthurian legend with touches of 19th-century Americana. The book doesn’t offer anything too profound in terms of characterization, but instead provides a clever twist on familiar tropes—one that’s sure to entertain.