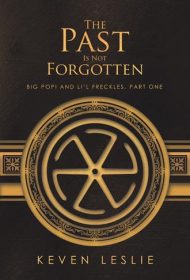 When house husband Walter Lemon, 48, takes his wife Claire, their four children, and his son’s 19-year-old girlfriend Layla to Tampa for vacation, the group is accosted by criminals bent on robbing and killing everyone. Lemon—who is bizarrely forced to sexually assault Layla—turns the tables and, with Layla’s help, kills the bad guys.

Overnight, the two become media darlings. Now rich and famous, they begin a company together, fall madly in love (and eventually marry), and jump from one deadly crisis to another. Matters become more complicated when they discover the existence of seven separate universes and learn that they can travel between the realms.

Although the novel boldly explores the boundaries of social mores in relation to romance-powered storylines, significant issues derail the narrative. Myriad grammatical errors notwithstanding, the biggest flaw is Lemon’s vile nature; his first-person viewpoint is so egomaniacal and sexist that it taints the entire reading experience. Lemon offhandedly refers to himself as a “red-blooded American superhero” and women inexplicably fawn over him (“I would give anything to have a man like you”). Lemon’s internal transformation—from an average man to a chiseled “Greek god” who tells emergency room doctors to pour whiskey on his bullet wounds and has a penis so big it has its own name—lacks all credibility.

The cardboard nature of Layla, who appears weak and naïve, and female characters largely characterized by their body parts, will likely offend women readers. Lastly, the hypocrisy of a character who considers himself “an honorable man” but cheats on his wife of 27 years with his son’s virgin girlfriend cannot be minimized. The result is a story that feels more like a masturbatory fantasy than a mainstream novel.

Ultimately, the novel sinks under the weight of such issues, particularly the story’s unlikable hero.