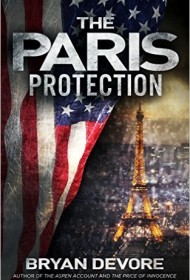 Author Bryan Devore delivers his third thriller with The Paris Protection, following up his well-received debut The Aspen Account (2012) and the The Price of Innocence (2013). Jam-packed with explosive action sequences, this novel delivers believable military operations and a gung-ho villain who wants to use violence to force a realignment of the world’s superpowers.

U.S. President Abigail Clarke has arrived in Paris for a public summit that aims to take on the global black market and dismantle powerful international crime syndicates. Readers see events mostly through the eyes of the President’s Secret Service protection detail, led by Special Agent in Charge John Alexander and two support officers, Rebecca Reid and David Stone, who are in a relationship.

The novel’s villain is a scenery-chewing terrorist named Maximilian Wolff, a former Israeli security officer who has turned his back on Western governments after witnessing the assassination of Prime Minister Yitzhak Rabin. Now Wolff and his Muslim lieutenant Kazim have assembled a small army to assassinate President Clarke in an attempt to ruin American-Israeli relations.

Devore is a superb writer who has clearly done his research into the inner workings of the Secret Service but also takes time to breathe life into his heroes and villains. This is particularly true of Wolff, who turns to the Carthaginian military commander Hannibal for inspiration. The overall effect is somewhere between a European-set Die Hard and the action novels of Matthew Reilly, who employs a similar style featuring an ultra-fast pace, plot reversals and intense action.

Movie fans who enjoyed Air Force One, White House Down or Olympus Has Fallen will find almost identical cinematic thrills here in a novel that plays out just like a big-screen blockbuster.