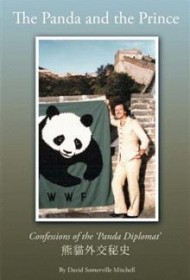 The World Wildlife Fund has been raising money to implement conservation projects around the world for about 50 years. The giant panda breed originating in China serves as the Fund’s immediately recognizable symbol.

During the 1980s, David Somerville Mitchell, already a successful public relations executive serving Asian markets, switched his employment to the World Wildlife Fund. Much of his responsibility centered on obtaining the rights to the panda symbol from the Chinese authorities. In addition, Mitchell hoped to spread name recognition in numerous other nations to help raise money while simultaneously increasing awareness to dangers to the natural world. Mitchell says he recognized early the natural affinity between nature conservation and the nascent environment movement.

Mitchell’s memoir is filled with names of World Wildlife Fund luminaries from his heyday. Perhaps most notable is His Royal Highness Prince Philip, with whom Mitchell consulted often. The anecdotes of Mitchell with the rich and famous, as well as with more obscure government ministers, often make lively reading, but sometimes accounts of negotiating sessions are overly detailed. Excising them would improve the memoir’s narrative flow. Readability would also improve if Mitchell were to pull back on the namedropping. It seems almost every Fund donor or director is famous or renowned. But the truly famous or renowned need no introduction.

Mitchell grew up humbly in a tiny fishing village off the coast of Tasmania. He could not have imagined that he would eventually escape the island to rub shoulders with royalty as well as prominent scientists. It’s understandable that he would lean toward including this surplus of information about meeting agendas and frivolous conversations he held with the venerable. Fortunately, this tendency doesn’t obscure the primary message of overcoming substantial obstacles for a good cause.

While the lapse in time since the 1980s will likely limit the book’s appeal, those interested in environmental and conservation movements and how public relations shapes opinion may find Mitchell’s story edifying.