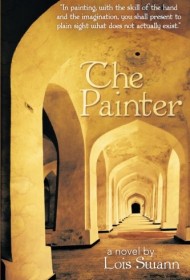 The tumultuous sweep of an Italian artist’s life in all its passion and complexity is the subject of this story within a story, narrated through the voice of the artist himself, Lorenzo Frasca, and through that of the cultured man who becomes his chance dinner partner one evening.

Lorenzo emigrates from Italy of the United States during World War II with aspirations as a portrait artist. Instead, fate compels his great talent to bring the beauty of Italian frescos to the walls and ceilings of a beloved church, a Spanish nobleman’s palace, even the humble entryway to his working-class apartment building.

Art as the voicing of Lorenzo’s personal and artistic growth is as vivid a character within the story as the people in his life, whose influences contribute to the forging of Lorenzo’s near-perfect character. Such relationships include: Tulia, his violent, mentally ill wife; Enza, Tulia’s angelic, illegitimate daughter; Anna, Lorenzo’s lover of many years whose devotion fires and inspires his work; Prince Filipe, his art patron and a fellow immigrant.

Author Lois Swann’s lush literary style is rich in imagination and detail, and makes Lorenzo’s ecstasies and agonies intensely available to readers: “She had no soul . . . she was a compilation of female parts that a soul might have held together to accomplish some good in the world . . . She appeared to me to be the refuse of a butcher’s waste barrel. Bones and fat. Meat and blood . . . I even smelled the gore of the butcher shop.” Readers with technical knowledge of architecture and centuries-old fresco and other painting techniques will also appreciate the author’s descriptive skill.

The Painter is an excellent piece of fiction, full of color, depth of plot, and well-crafted characters. It deserves wide recognition.