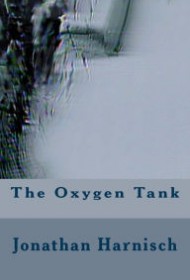 Constructed through a series of interconnected, erotically fueled, hallucinatory episodes involving Jonathan Harnisch’s signature character Benjamin J. Schreiber—who, like the author, suffers from schizophrenia and Tourette’s syndrome—this nonlinear novel is, on the surface, about struggling with mental health, sexual obsession, and toxic interdependency. But ultimately, this twisted and at times psychopathic story is an intimate journey of self-discovery steeped in existential philosophy.

Georgie Gust is Schreiber’s alter ego. Gust is obsessed with Claudia Nesbitt —an imaginary construct that is simultaneously his paraplegic lover, a one-night stand, a sexy neighborhood waitress, and his cheating wife, depending on what “schizophrenic sex-and-drug skit” or “sleazy hardcore porn-flick” scenario he is currently immersed in.

At the behest of his “psycho brain picker,” Dr. C, Schreiber chronicles his fantasies as Gust in meticulous detail by writing them down. In one particularly memorable sequence, Gust is living in a suburban McMansion in New Jersey. With Claudia dead and Gust now married to a shrew of a woman, he secretly opens a wax museum to pay homage to the object of his obsessive affection, who has inexplicably reappeared as an alluring waitress.

While not as brilliantly constructed as Harnisch’s Lover in the Nobody (2014)—which had a jaw-dropping revelation at novel’s end—his latest still delivers, although on a more muted, introspective level. Amid the chaos of Schreiber’s life, he—with the help of his psychiatrist—finds an almost Taoist peace of mind through deep self-analysis. “So, Ben, no matter how bad things get, no matter how stupid and ridiculous and absurd the whole world seems, even if the whole world goes crazy—remember, Ben, don’t forget to laugh.”

This is not necessarily an easy read but one that has palpable philosophical weight. Those adventurous enough to follow it to the end, will be rewarded by transformative glimpses into the underlying principles that govern the chaotic world in which we live.