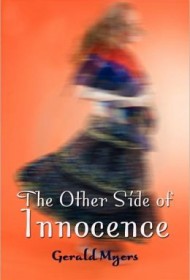 Mystery author Gerald Myers changes course with The Other Side of Innocence, a coming-of-age novel that contemplates whether or not the past can be forgotten.

Kelly Masters has a successful career and a happy marriage, but an invitation to his 40th high school reunion unearths buried memories. As Kelly recalls his senior year during the tumultuous times of 1968, he remembers Charlie, a girl who changed him more than any current event of that era. Charlie opened his eyes to social issues and literature, but his impact on her was far more devastating. The closer Kelly gets to his reunion, the more he realizes that his relationship with Charlie was a tragedy, one whose final act has yet to play out.

Though the concept of The Other Side of Innocence is intriguing, the presentation limits the reading experience. Myers “tells,” rather than “shows,” and the plot suffers under laborious explanation. The dialogue is over-wrought and lacks credulity. The conversations between the teenagers and parents during Kelly’s flashbacks are particularly difficult to believe. Myers knows where the novel is headed, and his incorporation of suspense – dream sequences, withholding information about Charlie – helps to keep the pages turning, but the author’s word skill stands in the way.

While the narrative is overworked, Kelly’s character is underdeveloped, leaving the reader confused about his motivations. Charlie, however, sparkles and is an example of what Myers could do if he let his characters breathe. Ultimately, this novel’s plot is well conceived but falls apart on execution.