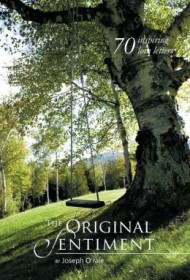 The Original Sentiment: 70 Inspiring Love Letters is a collection of Joseph O’rale’s “deep and sincere thoughts.” While it’s difficult to characterize the poems as artistically layered, they are sincere and thoughtful.

The pieces aren’t structured as letters but as lineated, rhyming poems in regular stanzas. Each gets its own chapter, as in Chapter Five’s “Sweet Talk,” which begins boldly: “Coated with the velvet of pomposity / And spitting with the swagger of a celebrity.” Following this poem (and each other poem in the book) is a longish prose section with metaphors from the poem quoted in bold type, followed by the author’s explanation, for example: “Coated with the velvet of pomposity: Many of us do not actually plan to exhibit pride when we meet others. What we miss out is to be able to display effectively the rule of first impression.”

While most of the poems address unsurprising issues such as love, God and faith, O’rale sometimes shows off a quirky way with sound and analogies, such as the title of a poem about the wheels of destiny, “Rotary Rhapsody,” as well as “Rainy Insinuation” and “Onion of a Genius.”

The author’s writing is sensible but uninspired: the poems lack the crackle of specificity, the concrete sensory details that draw readers into an experience. Aside from their end rhymes, they don’t attend to rhythm or other kinds of musicality.

The Original Sentiment is a sentimental book that won’t hold great interest for readers of sophisticated poetry. But those seeking poems that earnestly explain themselves afterward might appreciate O’rale’s musings.