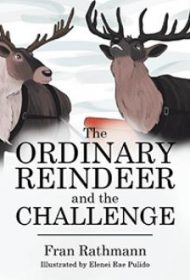 A reindeer faces a nasty competitor in Fran Rathmann’s children’s picture book The Ordinary Reindeer and the Challenge.

This book is a sequel to Rathmann’s An Ordinary Reindeer, which recounts the story of the main character’s hard work, which earns him the lead reindeer position on Santa’s sleigh. Here, the “ordinary reindeer” (who goes nameless throughout) is challenged by Harold, a “big mean reindeer” who wants to take over as leader. The ordinary reindeer challenges him to a race to determine who should lead, and despite Harold’s unfair tactics, the ordinary reindeer wins.

This is a promising conceit, but the narrative suffers from several issues. Normally, the tale would have readers rooting for the underdog—in this case, the ordinary reindeer. But because the character begins on top (although he briefly recaps how he earned his leadership position) and is looking to maintain his status rather than elevate it, some of that appeal is lost. And while the story implies a connection between the ordinary reindeer’s good deeds and ability to make friends with his ultimate success, the theme is vague and underdeveloped.

The color illustrations are handsome, but the text is hampered by inconsistent punctuation and confusing grammatical choices, such as: “It was important to me./ To make friends and belong/ So I helped a fellow reindeer/ Whose ankle he had sprained/ I took him to the doctor/ And back home again.” With no punctuation after “sprained,” and a period after “me,” the text reads awkwardly, and readers will be uncertain who “he” is in the phrase “Whose ankle he had sprained.”

Generally, simple end rhymes are paired nicely, but the rhythm is uneven and the rhyming pattern seems to disappear altogether at times, once for a whole page. The result is jarring.

Despite these issues, The Ordinary Reindeer and the Challenge is a pleasant story. Children will likely overlook its problems and enjoy this tale about generosity and hard work triumphing over selfishness.