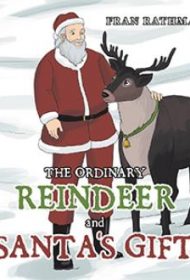 A reindeer receives the priceless gift of belonging in the third installment of Fran Rathmann’s Christmas-themed series.

The Ordinary Reindeer and Santa’s Gift provides the backstory of a lonely, unnamed reindeer with no family. He does have one friend, however, a female reindeer named Tessie, and the other reindeer treat him kindly. The ordinary reindeer trains for his job of pulling Santa’s sleigh as he waits for Santa to announce which reindeer will lead the pack. Eventually, Santa chooses the ordinary reindeer and bestows upon him a special name, “Star.”

The book’s strengths lie in its positive message of community, friendship and individual responsibility. The illustrations are strong, simple yet striking, making it easy for readers to infer human-like qualities in the different reindeer.

Unfortunately, the story contains very little plot or action, and numerous events are alluded to but never explained. For example, the ordinary reindeer tells us, “I fended off a challenge/ And met Tessie one day/ And now we wait to see/ What Santa has to say,” but the challenge is never described; neither is the reason why the reindeer are waiting to hear from Santa, though presumably it’s to hear Santa name their new leader.

When Santa picks the ordinary reindeer as leader, Santa says it’s because he “outshined the rest,” without giving details. We can assume Star proved himself the previous Christmas, but we don’t know for certain. And we’re told at the end that Tessie and Star are in love, but there’s been no dialogue or unusual closeness between them.

While this well-meaning story has a solid message at its core—even an ordinary reindeer can do extraordinary things—it’s lack of context and detail makes it less than ideal for newcomers to the series. It might find success, however, with fans of the previous books.