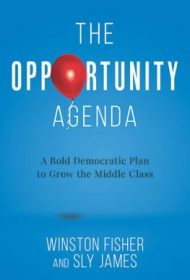 In The Opportunity Agenda, authors Winston Fisher and Sly James – a New York City real estate developer involved in civic and policy organizations and the former mayor of Kansas City, MO, respectively – call on Democratic candidates to run on policies that will create opportunity for middle-class Americans and earn their votes in 2020 and beyond.

The authors aim to provide a non-controversial alternative to those who think the Democratic Party’s best strategy is to highlight its stark differences with Republicans. To attract non-ideological independent voters, for example, they advocate a Portable Social Contract that would allow Americans to take health insurance, retirement and other benefits with them when they change jobs. They also advise Democrats facing large infrastructure projects to consider creative public-private partnerships (P3s), which were once the norm and could bring challenging projects to fruition.

The narrative adopts the tone of an earnest Newsweek Special Report, touching on issues like childcare, education and small business access to capital. With each topic, the authors serve up supporting anecdotes and statistics cited from other reports. Readers will also find a litany of what the Party needs (to find allies, refresh its agenda, become champions of the middle class, etc.).

However, the nuts and bolts of how to implement these ideas nationwide are largely overlooked: How will we pay for such plans? How will they be administered? Furthermore, while the title promises “bold” ideas, the book is mostly a rehash of existing thought, heavily footnoted to mainstream media and other reputable websites. Even when telling the story of the type of ideal “Opportunity Democrat” the authors envision – as embodied in upstart Abigail Spanberger, who focused on voter needs and avoided political drama to win a Virginia House seat in 2018 – the authors rely on a Richmond Times-Dispatch story, rather than original research.

In sum, those drawn to the book by its title are likely to be disappointed by the thin “plan” and recycled ideas presented here. Readers seeking a recap of the notions circulating in some Democratic circles, however, will find it a reliable, well-written resource.