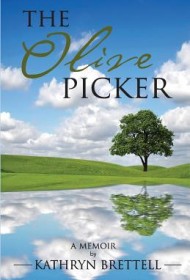 Kathryn Brettell’s The Olive Picker begins in an ambulance after an attack on the author, then 46. Paramedics ask who to call and she struggles to retrieve a phone number from her battered head. Then, having done so, she relives a joyful moment from a childhood all but devoid of them: Her father pushing her on a swing. “I hear myself laugh as the wind rushes past my face in its warm and perfect caress. My dad, behind me, pushes higher and higher. It is a beautiful day.”

Her ability to summon that moment under those circumstances speaks volumes about Brettell: her toughness, humor, optimism, and utter lack of self-pity, the very qualities that elevate her memoir from much of the genre —first-person child-abuse narratives that are sometimes referred to as “misery lit.”

The Olive Picker has the same basic elements of these staples: an abusive stepfather who dotes on his own children, saving his sadistic brutality for Kathi and her sister, and a weak-willed mother who turns a blind eye. But none of it— not the beatings, the Herculean chores, nor the myriad rules and prohibitions—succeeds in breaking Kathi’s spirit, not even decades later, when her own husband makes an attempt on her life.

A lot happens in between: two marriages, two children, a nursing degree, and a propensity for choosing partners and paths of least resistance. She tells all like the survivor she is: entertainingly, with wit and without apology, as when, after leaving home at 16, she spends $300 (earned picking the titular olives) on a 1959 Forestry Van that only runs in reverse. “I drove that clunker—in reverse—all the way to Scotty’s Transmission in downtown Orangevale where they got it running forward again…”

Kathi finally gets her life in gear too, and readers will cheer her all the way to the end. Delivering inspiration as well as entertainment, The Olive Picker is deserving of a spot on the bookshelf alongside such popular memoirs as The Glass Castle and Running With Scissors.