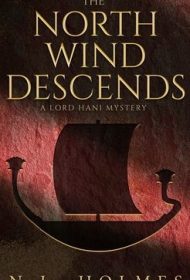 The North Wind Descends is the fourth installment of N.L. Holmes’ absorbing mystery saga set in pharaonic Egypt during the last years of Akhenaten’s reign and featuring lifelong diplomat Lord Hani. This story finds Hani tasked with discovering who brutally murdered a foreign ambassador, a crime that could trigger a war.

After receiving an honorific title from the king—Hani is named Master of the King’s Stable—for a career spent dedicated to diplomacy, Hani and his secretary (and son-in-law) Maya are sent north to prepare for the passage of a military force. The plan is to have the soldiers restore order to the region after wiping out the hapiru, a confederate of lawless nomads destabilizing the area.

But when a Babylonian emissary is murdered in an Egyptian commissioner’s palace, Hani must first uncover the killer’s identity before an unwanted war is ignited. His investigation reveals disturbing connections between the murderer and an “accident” that paralyzed his eldest daughter 17 years earlier. Complicating matters are rumors that the king is gravely ill, speculation that Akhenaten’s heir Tut-ankh-aten might not be of royal blood, and news that Hani’s youngest daughter, a lesbian, plans to marry an elderly patriarch.

The North Wind Descends is a worthy addition to a series in which Hani and his extended family become so familiar that each new installment is like revisiting beloved relatives. Masterful characterization and impressively intricate storylines notwithstanding, what makes these novels impossible to put down is Holmes’ ability to immerse readers in a richly described ancient Egypt: “His footsteps on the dry road sent up little puffs of dust. A wren was making its sweet, abrupt call from a tree in a neighbor’s walled garden, and the honeyed scent of figs was in the air. Hani heard a woodpecker from somewhere.”