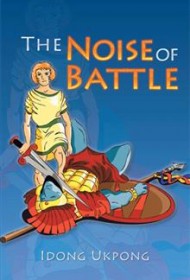 The Noise of Battle is primarily the story of the biblical King David, before and during the time he was king. Instead of simply resurrecting biblical history, author Idong Ukpong tries to help readers get inside David’s head, with mixed results.

Following an initial chapter summarizing David’s life, the account begins with a young David fighting the Philistine giant Goliath. After his victory, women gather in the streets, singing in celebration. This allows David to glimpse Bathsheba, who will be important to him later, and becomes a seed of enmity between David and King Saul.

For years David has played the harp to soothe Saul and is a friend of his son, Jonathan. But from the high point of David’s victory, his life takes a downturn. Saul turns on David, plotting to kill him, until Saul and Jonathan are themselves killed. David becomes king but suffers through the antics of his wayward sons, the deaths of several sons, bickering among his wives and guilt from impregnating Bathsheba, another man’s wife, and then having her husband killed.

Ukpong ascribes thoughts to David while these episodes occur. As she portrays him, David is torn between love for his sons and agony over their misdeeds. He also feels guilt over Bathsheba. Readers will have difficulty discerning Ukpong’s insights into David, however, due to the text’s many unnecessary details. For example: “However, Abner who had been Saul’s captain took Ishbosheth and set him as king over Gilead, and the Ashurites, Jezred, house of Ephraim, and Benjamin.” Also, punctuation errors are rampant, and a second part of the book, a narrative from the perspective of David’s son Solomon, doesn’t tie in well and would work better as a separate book.

Ukpong has the seeds of a promising narrative, but the text needs editing to reduce extraneous facts. Christians familiar with David’s story might be willing to overlook the story’s undue complications; others will find themselves lost in the many details.