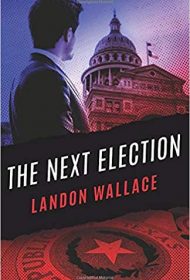 Landon Wallace’s The Next Election is a riveting, political page-turner. A sequel to his book The Election, it centers on Blake Buchanan’s return journey to the Texas state legislature after a failed gubernatorial campaign in the previous book.

Buchanan bowed out of the governor’s race after the operatives of his political opponent, Grace Striker, planned to publicly humiliate his wife for her lesbian affair, and he’s now getting divorced. But his wife isn’t the only unfaithful one: he’s still hung up on his high school sweetheart, now a married New York restaurateur.

If he and his wife’s bedroom indiscretions weren’t enough, his lover’s red-hot restaurant faces real estate woes possibly caused by her controlling hubby. There’s also an abundance of infighting and possible mergers and departures at the law firm where he’s a partner and where the firm’s founder and his mentor is debilitated from Parkinson’s disease. What’s more, his former campaign manager has plans to get him back in the state senate.

Meanwhile, Striker’s former aide – and younger lover – Tony Léon is working for a political rival of both Striker and Buchanan, and unbeknownst to Léon, Striker is machinating for another chance at the governor’s seat.

As overstuffed and convoluted as this plot sounds, it’s expertly presented, captivating readers with political intrigue and delivering believable characters and witty dialogue. Even minor characters spout interesting things, such as when one mocks a newspaper interview with Buchanan’s challenger in the state senate by making up his own question and answer: “ ‘Representative English, what do you think about that dog turd lying on the floor over there?’ ‘I think it’s the most conservative dog turd the state can offer.’”

While a sequel, the story easily stands alone. And although the plot focuses on the Republican party – Blake is considered a liberal or moderate conservative – political junkies of all persuasions are sure to enjoy the intrigue and shenanigans in Wallace’s wild ride through contemporary Texas politics.