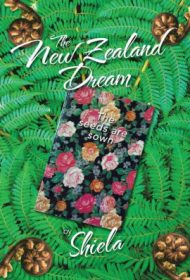 In this no-holds-barred memoir, Shiela recounts her troubled childhood and adolescence in New Zealand during the 1980s and ‘90s.

After an evocative introduction foreshadowing recent personal growth after heart-wrenching familial loss, the prose reverts to a chronological, almost stream-of-consciousness narrative, detailing her earliest memories of a strict religious upbringing in her family’s beachside flat in Napier and then Clive, a farming town on New Zealand’s north island. Nothing is deemed inconsequential, from toys, clothes and friendships to darker undercurrents such as injuries, death of pets and her mother’s mood swings. The breakdown of her parent’s marriage leads to her move to a subdivision closer to the city, where local gang influences, school bullies and new men in her mother’s life, come into play.

The candid tone the author employs recalling her parents’ troubled upbringings, domestic violence she’s exposed to during her formative years, struggles with weight and low self-esteem and compulsion to lash out at “happy” peers and teachers, may appeal to some readers. Her resilient, often feisty disposition (“Amongst all the testicles, I was the main one who grew some balls to protect my family”) is also engaging.

However, occasional spelling errors, lack of narrative structure and effective transitions (“I’ll tell you about that later”) are problematic. Many readers may also be troubled by the normalization of substance abuse, binge drinking (“I stumbled back to the hostel to spew my ring out”), DUI and other criminal behavior during the author’s teens, and the sheer brutality of the violence depicted. (Explicit descriptions of intravenous drug-use and sexual acts also appear in this text.)

Readers will almost certainly be disappointed by the ending. Although the beginning pages foreshadow traumatic events in the author’s current life, these events never materialize. Instead, the narrative ends when Shiela is in her early 20s and indicates that future titles will continue the story. Given the scant emotional return delivered in this title, it’s unlikely that many will take that invitation.