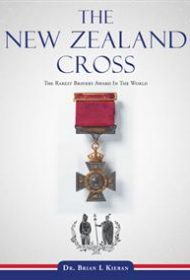 Part 1 covers how the Cross originated, spurred primarily because colonial troops were ineligible for the Victoria Cross for valor.

In Part 2, the author reflects on the “deeds of the 23 recipients” who earned the Cross. New Zealand had no army then, and so it was Rangers, Armed Constabulary, Militia, or Corps of Guides who battled the Maori, aboriginal people who resisted white settler encroachment. The serious fighting took place in the late 1860s and early 1870s. There are more than a few eccentrics highlighted here. For example, Thomas Adamson, termed a Pakeha Maori (a white living as a Maori), went into battle dressed as Maori and adopted other Maori practices, as well, such as beheading a fallen enemy. With its compelling anecdotes of heroism, this section allows an understanding of history through the people who created it.

Part 3 covers New Zealand War Campaigns from 1860-1872. It’s a comprehensive, even at times dense, strategic (rather than personal) recap of conflicts between white settlers and Maori. In this portion, Kieran offers information about the assorted generals and Crown-appointed governors leading the white settlers. This, plus geographical locations and possible unfamiliarity with colonial history, could make Part 3 challenging for some readers.

Part 4, “the Aftermath,” offers Kieran’s notes on New Zealand’s emergence from colonial status to its place among the world’s nations.

Including appendices, bibliography, and index, Kieran’s work reaches scholarly levels. Expect no theatrics; his writing is straightforward, enhanced with photographs and images. General readers will, perhaps, appreciate Parts 2 and 3 the most because the history revealed is human-driven.

Kieran’s esoteric subject suggests a narrow market for the multi-published, English-educated author. For those interested in the topic, however, this is a thorough, detailed history of a rare award.