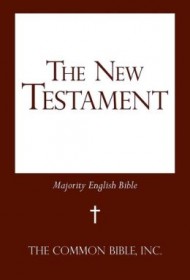 There are dozens of different translations of the Bible available on the market, targeting a wide range of denominations, from Lutheran to Baptist to Catholics to Universalists. With so many versions out there do we need another?

The editor of The New Testament: Majority English Bible thinks we do, and his edition, a labor of love and dedication 24 years in the making strives to take the best of the best of existing English translations and create a Bible that is faithful to the source material and easy to understand for the masses. His translation philosophy “centers around three concepts: literal, traditional, and modern. It is to be as literal as possible to the original Greek, traditional in its familiar cadence and format, and modern in its writing.”

The MEB is simply designed with two columns of text per page (sometimes the type in a Bible can be near microscopic, but the MEB is easy to read). The text itself is friendly and accessible. Dense passages from the letters of St. Paul to the Book of Revelation are open and light, and familiar stories, such as the parables and the exploits of the apostles seem, well, familiar — and that’s a good thing because the text can feel somewhat like you’re talking to an old friend.

The preface to the MEB contains a few small syntactical errors, which unfortunately act like scratches on the side panel of new car; it doesn’t affect the car’s power or purpose, but it’s a blemish nonetheless.

But all in all, the MEB is a readable translation. Scholars will have to debate its accuracy, but most readers will find this to be an approachable edition of a sometimes-daunting text.