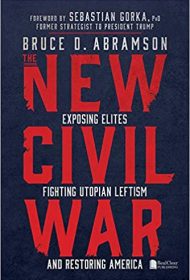 “Conservatism is finished. You can’t conserve what you’ve already lost.” With that provocative assertion, Bruce D. Abramson advises “American restorationists” on how to recapture American institutions from progressives in his provocative book, The New Civil War.

Conservatives, he argues, stood on the sidelines as progressives incrementally took over America’s institutions—media, Hollywood, Silicon Valley and more—through infiltration of academia, which churned out indoctrinated leaders and followers. He notes that he shared their views earlier in his career as an academic and technologist, but fell off the path as progressives repeatedly failed to meet his tests of reason and reality, instead handing their minds over to so-called experts.

The author asserts that, among other misguided actions, progressives: use their rhetoric to convince minorities that their salvation from poverty and racism is only found in Democrat policies; work to deny immigrant communities the stabilization and opportunities that come from Americanization; and refuse to consider alternative scientific explanations for climate change.

Abramson suggests Americans reject progressive attempts to capture and redefine the English language to suit their views and work to eliminate government employee unions, among other resistance measures.

Throughout, Abramson writes in a lively style, such as his observation that, “In furtherance of its emergence as a full-blown religion, progressivism adopted a sacred garment: the face mask.” He also offers entertaining and insightful descriptions of various classes of experts—e.g., the “Credentialed Elite” (who teach college students “that credentials are more important than experience, that theory trumps practice, that enlightened elite opinion is always correct, and that the unenlightened masses are immoral fools”) and “complexifiers” (who “assume the critical task of making simple things appear complicated”).

Progressives will likely find that The New Civil War restates standard conservative apologia. Still, the book will allow them to view themselves as the other side does. Conservatives, on the other hand, will find the book a passionate, concise and well-argued roadmap for planning and executing their own resistance.