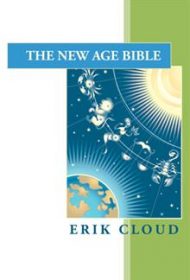 Erik Cloud’s The New Age Bible represents the author’s attempt to synthesize his own brand of numerology, astrology, and religious scholarship into a practical philosophy. Cloud’s central thesis appears to be that the world’s problems can largely be attributed to the diminished status of men and the waning cultural importance of male achievement.

From the outset, Cloud’s work seems intensely personal, and perhaps because of this he fails to bridge the gap between his thoughts and readers’ comprehension. The significance he draws from numbers is highly idiosyncratic:  Each number is assigned gender and sexual significance based on a supposed resemblance to male or female genitalia (although it seems that in the case of the numbers 3 and 8 he has confused genitals and breasts). These numbers are cross-referenced with zodiacal signs, allegedly to produce cultural or spiritual insight.

But while it seems as if these are his goals, his writing style makes it exceedingly difficult to grasp his meaning. Cloud’s sentences are syntactically challenged, run-on, and often fragmented. Readers will struggle with ungrammatical lines such as: “Do the ever-present sun setting billions of times make that much sense when it is apparently very omnipresent and limited concerning age?” A single sentence can switch streams multiple times; meanwhile, paragraphs, which have no discernible organizational structure, can run for pages. Typos are abundant.

Beyond merely being unclear and cluttered, however, Cloud’s stated aim and the book’s content don’t match up. The majority of the text, peppered with charts and equations, is actually devoted to his political views, which are certain to offend a plurality of readers. He demonizes Democrats, calls women psychopaths and whores, refers to Asians as “yellow people,” affirms his belief in white supremacy in the event of a race war, and even appears to praise Hitler.

In short, rather than the religious/spiritual tract promised by its title, The New Age Bible delivers  an angry rant, which is deeply offensive and nearly impossible to decipher.