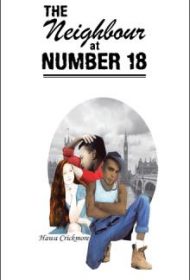 Hawa Crickmore’s character-driven novella, The Neighbour at Number 18, follows the connected lives of residents living in a London neighborhood. Here amidst the guise of love and friendship, the story reveals the harsh realities of child predators, marital discord, and mental illness, as well as other experiences that influence a life’s journey.

Two young widows, Maureen and Brenda bond over lost husbands and the daily struggles of raising children. Their children, likewise, become close, with Brenda’s daughter, Maria, looking up to Maureen’s daughter, Emilia. Problems arise, however, when Emilia succumbs to the nefarious advances of her mother’s boyfriend and a cousin who witnesses the act blackmails Emilia in exchange for his silence, forcing her to recruit young girls into his own predatory lair. After Emilia lures Maria into her cousin’s circle, the young girl suffers repercussions that will plague her throughout her life.

While chapters at times seem like individual tales, the book follows an overall storyline as the characters take divergent paths that interweave. Prostitution, drugs, and incarceration for some sharply contrast with the law career of another. Love and romance ultimately give way to insecurities and infidelities when a conniving new neighbor enters the mix.

Crickmore’s across-the-pond narrative is appropriately characterized by formal phrasing and words like “Mum” and “snog.” And the author’s descriptions sharply define the characters: “He had no mercy for the children; he was at that moment a pervert, an animal, a sexual predator.”

The narrative suffers from a few issues. Although time summaries like “after twenty years of marriage” allow the narrative to jump ahead, this can be jarring, emphasizing Crickmore’s tendency to tell rather than show happenings. There are also a handful of proofreading errors, including misidentified characters, which causes unnecessary confusion. Additionally, the rather abrupt ending may frustrate some readers.

Topics of sexuality, lust versus love, and marital betrayal suggest a more mature audience for this intimate, if uneven, journey of connected lives.