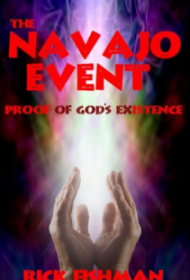 Rick Fishman’s humorous novella, The Navajo Event, involves a miraculous healing and the reaction it spurs in others.

The tale is mostly told through the eyes of Roland Green, father of Carli. During a terrible fire in Carli and her husband Marty’s apartment, Marty dies and Carli suffers a crushed spine and burns over 30 percent of her body. She undergoes a spinal operation, but right afterward, her father’s cousin brings in a team of Navajo healers, including a medicine man named Rising Sun. After a ten-minute ceremony involving supernatural occurrences, Carli is miraculously cured.

But some in the medical community look askance at this miracle, believing Carli is perpetuating a hoax for fame and fortune. Carli and her family then face a series of ordeals—imprisonment, interviews by the FBI, etc.— and the story careens from one absurd situation to another as things grow wildly out of control: a weird yet talented spinal doctor walks around carrying a 12-inch hunting knife; the Pope gets involved; Carli is even named a living saint.

The story’s dialogue is a highlight. “Dr. Stanton…my family…we’re just three shlabutniks,” Roland says at one point. After Carli is healed, the attending doctor thinks someone’s impersonating her, so she’s imprisoned. “Seriously, Doc?” says a male nurse. “You’re sending her to the ‘naughty ward’?”

The story also suffers from a few flaws. Fishman’s first two chapters consist of single pages, seemingly to give character background information; these chapters require more fleshing out. Additionally, even with the novel’s absurdist slant readers might question some events: Would hospital doctors really think the Greens were trying to pull a hoax? Would the characters really have been imprisoned?

Finally, the author randomly bolds words, which is distracting, and the book’s inclusion of photos of real people and things seems odd in a fictional work.

Despite these shortcomings, the tale is heartwarming and humorous, and readers will quickly breeze through it to learn what happens next.