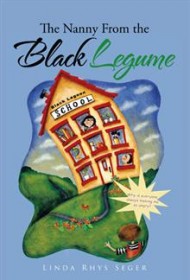 In The Nanny from the Black Legume, fourth-grader Dane is visited by a miniature nanny who happens to live in a black bean. Nanny arrives with a message about controlling one’s temper, particularly appropriate since Dane has been known to punch holes in walls when he has a bad day, destroy flower gardens in fits of rage, rip the heads off teddy bears and dump glitter glue in the desks of classmates who anger him. “Don’t choose to lose your temper” is a common refrain from the pint-sized visitor.

While the message the book offers is a good one, the way it’s delivered doesn’t always work. For example, talk of kicking “the ever-livin’ crap” out of walls won’t necessarily fly with the parents and teachers of elementary-aged children, who are supposedly the audience for this book.

In addition to crude language, the author uses words such as “ascertain,” “trifling” and “pontificate,” which most elementary-aged children won’t understand. Also, the dialogue seems unnatural at times, such as when Dane’s mother tells him “Let me deal with Brock later. I am worried that your anger is becoming out of control. … We’ll get to the bottom of this problem and, undoubtedly, there will be some apologies forthcoming!” In the real world, most parents don’t talk to their children in such stuffy ways.

The author leaves the door open for a sequel, but first The Nanny from the Black Legume needs to learn a thing or two about writing for elementary-aged children from the book that no doubt inspired its title: The Teacher from the Black Lagoon.