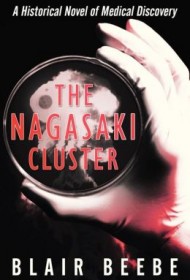 In 1979, Dr. Robert Gallo isolated a virus that causes T-cell leukemia in humans. In The Nagasaki Cluster, author Dr. Blair Beebe offers this highly fictionalized account of the events leading to that discovery.

Two married scientists, Lynn Lucas, a microbiologist, and her husband Luke, a medical doctor, are Navy officers stationed in Indonesia. The pair is called upon to investigate an outbreak of hemorrhagic disease in the dense jungles of New Guinea. At the same time, another American scientist travels to Nagasaki, Japan, where researchers seem convinced that their outbreaks of T-cell leukemia are attributable solely to the effects of the atomic bombings in 1945 at the conclusion of WWII. The American is found murdered shortly after he arrives.

The character of Lynn drives this novel with her extraordinary courage, braving areas of New Guinea where few people go. From Jakarta to Nagasaki and Washington, in pursuit of the origins of a fatal disease, Lynn successfully battles would- be assassins who have twice threatened her life. These scenes, which put Lynn up against long odds, provide real excitement. She is a driven woman, owing perhaps to the contentious relationship she has with her parents.

This is an area, however, that the author alludes to, but doesn’t explore fully. The novel is competently written, but the author fails to tie up loose ends, such as who precisely was responsible for the doctor’s murder and the two attempts on Lynn’s life and why they happened.

Readers without a background in medicine may enjoy the novel nonetheless, and will perhaps gain an appreciation of how difficult it is for scientists to gather mountains of data in order to advance science.