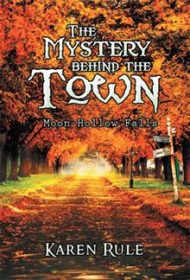 Clairvoyants, psychics, witches, ghosts, and astral time travelers inhabit this spooky urban fantasy novel, written in a light tone despite the seriousness of the danger for all involved.

A five-month’s pregnant psychic named Lela narrates the story, which focuses on her attempts to figure out why the town of Moon-Hollow Falls sometimes fades into invisibility for anyone who leaves the vicinity. She travels back to the year 1811 through astral projection on several occasions to learn how and why the town’s ancestors arranged the disappearing act.

With her husband and team of friends working with her, and an evil shopkeeper and two long-dead spirits plotting against her, she struggles to solve the mystery before baby Charlotte arrives in the spring. In addition to this central goal, Lela spends time negotiating with evil spirits haunting her house, has telepathic conversations with her psychically gifted unborn daughter, and gets advice from neighbors regarding the evil energy that envelops the town.

Unfortunately, an awkward writing style and the need for editing derail the book’s potential. For example, when a dark force surrounds her house, Lela says: “But we hadn’t gotten around as to where it came from. However, I hadn’t given it a thought of where it came from, but that is food for thought, though.” At more than 600 pages, this book could be improved without such repetition of ideas, as well as repeated sentences, and specific words (“hon” and “darl”, for instance). Frequently, an incident happens in the story and is then repeated once or twice in subsequent conversations using nearly the exact same words.

Other issues include: unnecessary details, such as recurrent coffee breaks, tea times, meal preparations and bathroom visits;  jarring shifts in tense, narration, font size, and typeface; and spelling, punctuation, grammar, and word usage errors (“Victoria-Grace had me reverted [sic] to my seat”). All combine to make for a disappointing read.

Although the novel starts with an intriguing idea, even the most dedicated urban fantasy readers will have difficulty overlooking so many missteps.