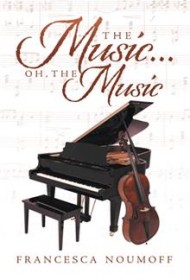 Francesca Noumoff’s The Music…Oh, the Music is both a lament and indictment. Set in a nursing home, the novel depicts the mental landscape of a Russian noble woman during the last hours of her life. In her delirium, the old woman sees figures from her past drift in and out of her “little white cell.” Each figure has a story. Many were perpetrators or victims of the Holocaust. Others were musicians or artists whose work has long been forgotten. Noumoff relates the raison d’Ãªtre for each character in compressed, impassioned, and hallucinatory language, giving the overall impression of Macbeth’s players on stage, “full of sound and fury.”

Each player’s piece resembles a fugue and is stitched to the others, and the old woman’s psyche, through the recurrent theme of music. The main character is, herself, a musician who often hears phantom fragments of chamber and orchestral music. Throughout the novel, there is a recurrent lament for the loss of talent and art, and a recurrent indictment against those who perpetrated atrocities. The over-arching motif of the book is one of waste: the waste of lives lost, the waste of lives derailed, and the waste of lives shelved in “a municipal home for the aged.”

This is a serious work and would be well-worth reading if Noumoff showed a little more skill or had an astute editor. As it stands, however, the novel is both turgid and confusing. Many of the sentences are either fragments or run-ons, and the vignettes lack a clear line of thought. It is possible that Noumoff intended her chapters to be more like tone poems than prose, and the rare reader may appreciate this. Most, however, will soon find themselves lost in a muddle of sentences that have too much fury and too little meaning as The Music…Oh The Music drowns out its own refrain.