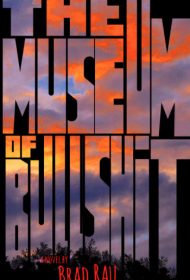 Brad Rau’s The Museum of Bullshit is an intriguing meld of literary and adventure fiction that offers readers greater nuance and depth than its provocative title might suggest.

Lydia Swane and Louis Price are an unlikely pairing to find in Washington’s Olympic Peninsula in deep winter: Lydia has made her name researching the elusive Sasquatch (or Bigfoot); Louis is an African-American writer better known for his extremist right-wing TV persona. They are here because the Olympic Museum of Cryptozoological Studies is about to unveil its newest exhibit, a Bigfoot caught in local forests. But this tourist trap is filled with dubiously lit curios and freakish specimens of questionable origin, and the Bigfoot on display has already been taxidermied. The museum curator will not allow photographs, DNA testing or disclose who captured it.

Lydia quickly writes it off as an elaborate hoax, but Louis (with a book deal to finish) goes to extreme lengths to convince her to join him in a quest to investigate the specimen’s origin. An enigmatic local taxidermist Clyde Whitethunder soon piques Lydia’s interest, and the trio find themselves, both literally and metaphorically, knee-deep in snow in uncharted wilderness. Each are seeking meaning; each have demons to face.

With poise and artistic prose Rau explores themes of race and broader identity, grief and society’s devaluation of authenticity. Evocative description and powerful characterization drive this novel, from Lydia’s quiet authority (“[S]he gave a little pause, pushing back the mounds of paper on the desk’s edge, clearing a little place where she leaned her wrists. It was like she’d taken ownership of the whole desktop with that one gesture”) to the physical environment mirroring Louis’ feelings of anxiety (“a gunmetal gelatin held the trees apart and kept the heavy sky from collapsing and smothering them all.”) The narrative’s only flaw is that it could have benefitted from more levity.

The Museum of Bullshit is recommended to readers who appreciate thought-provoking prose and character journeys with depth.