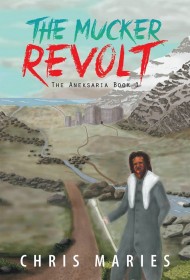 Chris Maries incorporates an impressive number of narrative elements in The Mucker Revolt, an earnest and detailed science-fiction novel that hints at a longer series to come.

The main theme here is revolution. Maries sketches out a fantasy world called Inalsol where a small agrarian population of humans known as “Muckers” battle an oppressive technological overlord known simply as “The Frame.” A group of humans known as the Divines also populate this imagined world, and they pose a separate dangerous threat to the Muckers as enemies and slave-owners. With a young Mucker named Cullin and an escaped slave named Sara as central figures, Maries builds a narrative that culminates in an epic battle of humans versus machine.

That underlying conflict forms the heart of the story here, but Maries incorporates a wide range of narrative colors to flesh out his imagined world. With a detailed appendix of characters, measurements (how a year is divided, distances measured and so on) and vocabulary to accompany the main tale, the author invests the fictional setting of Inalsol with a credible depth. What’s more, Maries creates carefully constructed characters and offers moments of compelling action (the final battle between the Muckers, machines and Divines is a satisfying resolution to the novel).

These high points come with some slow moments, however. Maries’ writing sometimes struggles with the weight of its own ambition, as it seeks to combine elements of fantasy, science-fiction and medieval history. What’s more, the text includes a consistent amount of simple punctuation errors. As the book progresses, those slip-ups become distracting.

Despite those flaws, Maries offers a fresh and committed take on multiple genres. The book will appeal to fans of a wide range of styles, and it offers a promising foundation for future installments.