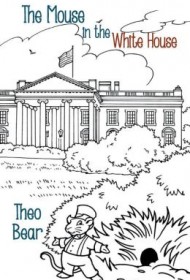 In Theo Bear’s illustrated chapter book The Mouse in the White House, a friendly mouse named Reginald Taft Brown takes readers on a behind-the-scenes tour of the nation’s Executive Mansion. Offering “nibbles of information” and anecdotes about the White House’s history from the 1700s to present day, Reginald is an entertaining storyteller and educator.

Reginald’s family has inhabited the White House clandestinely since its construction. Visitors must be sworn to secrecy about their mouse-guided tour because, as Reginald explains, people aren’t fond of rodents.

Getting on in age, Reginald enlists his nephew Ronald, niece Louisa, and wife Jane to conduct different legs of the tour. The group visits the White House switchboard, the press room in the West Wing, and the library in the Yellow Oval Room. Reginald rejoins the tour in the library and regales listeners with cheerful stories about the boyhoods, presidencies, and marriages of Harry S. Truman, Abraham Lincoln, Dwight D. Eisenhower, and William McKinley.

Black-and-white sketches nicely replicate various tour stops, and Bear’s writing is lively, engaging readers by having characters address them directly. Reginald asks: “Are you studious? I sure am.” Louisa declares: “Remind me later to have Ronald tell you some more fun things about Air Force One, okay?” Additionally, by imploring readers to keep the mice’s secrets hush-hush, Bear signals that their participation is valued.

The book disappoints in two ways. First, it ends abruptly: Reginald and Jane depart for Blair House (the president’s guesthouse) and don’t return to the story to say goodbye to their guests. In their stead, Ronald and Louisa bid a quick farewell and encourage readers to return to Washington for another tour. Second, the text employs harsh words such as “stupid” and “hate,” which detract from the book’s whimsicality.

Despite these missteps, The Mouse in the White House remains a charming and illustrative rundown of U.S. history and exploration of the most famous home in America.