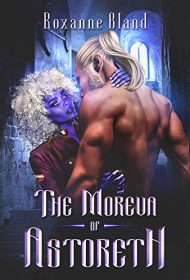 The first installment of Roxanne Bland’s Peris Archives saga is an intriguing blend of science fiction and romance. The story revolves around the forbidden relationship between a Devi acolyte temporarily exiled to a remote outpost populated by another race and the leader that she falls in love with.

Tehi is a moreva: a priestess in a religion in which her own grandmother is a deity. But because of Tehi’s unwavering bigotry against the hakoi, a race she perceives as genetically inferior, her grandmother (instead of executing her) offers her an out: work for a year as the religious administrator of a remote garrison built to protect an invaluable landing beacon that is inhabited by hakoi.

Tehi, who has violet-blue skin and white hair, feels hatred and disgust whenever she sees the giant pale-skinned beings. This sentiment doesn’t change when she meets the chief of the outpost, a towering hakoi named Laerd Teger, whose hostility towards her is apparent. “He was the biggest hakoi I’d ever seen. His muscular shoulders looked as broad as the mountains that surrounded us… But it was his eyes that intrigued me most. All the hakoi I’d ever known had brown eyes. His eyes were blue, like the stars, and just as cold.”

The somewhat predictable romantic storyline is buoyed by the intricate plot involving Tehi’s secret goal to find a cure for a deadly virus. Tehi, a healer with extensive medical knowledge, reluctantly enlists Teger and local healer Hyme —who lost his heartsbound to the disease — to help in her efforts.

But while the relationship between the two characters is certainly emotionally intense and authentic, their relationship takes too long to develop, an issue that may irk romance readers expecting a more traditional narrative rhythm. However, the science fiction elements—particularly world-building—are spot on, and the bombshell plot revelations at novel’s end are laudable.

In all, this is a solid start to what could be a highly entertaining genre-blending series.