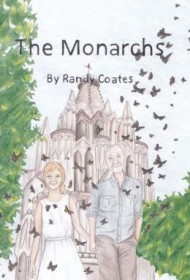 In his first novel, Randy Coates tackles some tough topics: old age, illness, and death. With The Monarchs, he pulls no punches on any of these subjects, offering a raw and sometimes painfully realistic look at how one paired-for-life couple handles their final years, months, and days together.

Coates gives us Sharon and Robert, a retired couple who travels annually from their chilly Canadian home to San Miguel de Allende, Mexico, in a human “migration” that parallels the path of the majestic Monarch butterflies. In their twilight years, however, the trip becomes more and more difficult, as the increasingly depressed Robert’s prostate cancer causes him considerable pain, inconvenience, and embarrassment. Like the famous butterflies, however, the couple continues to make their trek despite the odds against them.

Coates’ delivery is not without humor. Robert, for instance, wonders if the doctors are just throwing darts at a diagnostic chart and choosing a new remedy for him each time he’s in the hospital. But the bulk of the very graphic writing focuses on the growing humiliation of Robert’s incontinence, which makes for fairly grim reading. When Robert doesn’t quite make it to the bathroom, for instance, Coates writes that a “brown stream followed him like an obedient dog.” One or two such scenes showing us the way cancer has made Robert’s life almost unlivable would be enough, but Coates revisits this theme so frequently and intensely that it overshadows the charming relationship between curmudgeonly Robert and his loyal, if frequently sarcastic, wife.

The story moves slowly toward its inevitable end, with ambulance calls and hospital stays becoming more and more frequent. The Monarchs isn’t light reading but may resonate with seniors facing end-of-life decisions. Coates ultimately turns away from grisly medical details to evoke the eternally renewing butterflies. Death, he suggests, is not the end, but merely a migration to a new place.