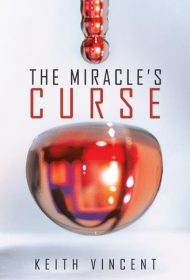 What happens when a machine can provide you with everything you want: food, clothing, machinery, even living tissue for organ transplants? That’s the concept of Keith Vincent’s engaging science fiction novel The Miracle’s Curse.

The story introduces Boston College graduate student Peter Harris as he completes his prototype machine that rearranges the atomic structure of the air’s molecules to create new material. “Since he’d seen his first episode of Star Trek,” the author writes, “he was hooked on the concept of the replicator, where ordinary items could be produced seemingly out of thin air.” The device relies on carbon dioxide, so it even reduces greenhouse gasses. But the U.S. government wants it stopped for unstated reasons.

Much of the novel follows those efforts and Harris’s team’s attempts to thwart them. In the process, readers are taken to New York, Costa Rica and other locations as Harris’s new company, STreplicator, launches a product that will inevitably change the world.

The characters are well-written and three dimensional, each with understandable motivations and goals. There are no villains, per se. Although the U.S. government’s opposition to the new technology may seem petty at first, readers soon learn that a device that dispenses limitless material goods from thin air can produce some troubling unintended consequences.

The story offers solid pacing and dialogue, and the author skillfully maintains a sense of place. It also delivers tense scenes involving espionage, an assassination attempt, and the replication of a human heart for an emergency transplant in defiance of federal authorities.

Vincent spends copious time on governmental maneuverings and the process of securing venture capital for the business launch, with only the final few chapters covering the sweeping cultural and economic changes resulting from the new technology. This creates somewhat of an imbalance. Also, occasional political comments by various characters can seem like brief lectures.

Ultimately, though, those who appreciate stories employing speculation to explore social issues will enjoy The Miracle’s Curse.