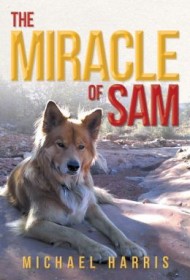 This is the true story of Sam, part coyote, part Golden Retriever, who is repeatedly adopted from the Humane Society only to invariably escape and wind up back at the shelter. Then, Linda and Michael Harris, fresh from the loss of their own Golden Retriever, meet Sam, and all three lives are changed.

Sam is a smart animal, possessing many of his coyote father’s wild instincts. On walks, he protects his canine companions from packs of coyotes; at the dog park, he puts the alpha bully in its place. He finds lost children, leads rescuers to an injured Linda, and even seems able to detect illness. One day as Sam is riding with Linda and her daughter, Lisa, Sam takes a keen interest in Lisa’s left cheek, licking and sniffing it. The event is forgotten for days until Lisa calls her parents. “She had some discomfort from an old filling, and when she went in to …her dentist, he determined she needed to have a root canal,” Harris writes. “The tooth had been seeping poisonous fluid for several days, a condition that could have become very serious…”

Sam is no doubt a remarkable dog, and his exploits make for a compelling read. But the book is marred by several technical issues. The story is told by three narrators: Michael and Linda Harris, and Sam. While hearing Linda’s point of view juxtaposed with Michael’s can be interesting, when Sam takes over, the narration feels hokey. The multiple points of view also lead to repetition and redundancy. In addition, there are troubling inconsistencies, such as early on when Linda and Michael snake train Sam by letting a gopher snake grab onto his snout, only to contradict this later, when the narration tells readers that Sam’s snake training must have occurred in the wild.

Animal lovers will enjoy reading about Sam, but the book could have been improved significantly by allowing Sam to remain mute and by undergoing a more careful edit.